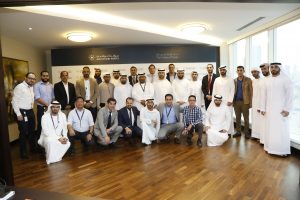 Abu Dhabi Ports (A) team won the opening match 5 – 1 against Emirates Steel team, while MICCO Logistics team won 2 – 1 against Etihad Rail team. Prior to the launch of the tournament, Abu Dhabi Ports organized an exhibition match between the company team and the UAE’s “Irada team”, representatives of the UAE at the Special Olympics World Games.

23 teams are participating in the tournament, representing Abu Dhabi Ports’ partners from the public and private sectors. Teams will play the tournament in five groups that were drawn up earlier, in accordance with rules and regulations of International Socca Federation in cooperation with Abu Dhabi Sports Council.

The stadium will host 4-5 matches every day for three weeks. The top three teams will be awarded valuable prizes, in addition to Best Player, Best Goal Keeper and Ideal Team awards.